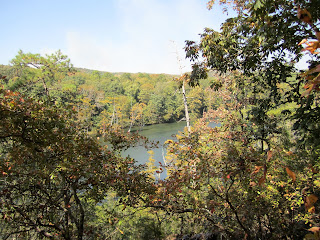 The Scouting Adventure was a huge success I am happy to report! This past weekend The Little Guy, me and Hubby went to Beaver's Bend in Oklahoma for a Boy Scout backpacking retreat.

I knew we would have to hike into our camp site on Saturday, and Hubby had mentioned that it would be a six mile trek, but no one mentioned that we were hiking around a small mountain. I had in my mind that this would be a relatively flat journey with perhaps a hill or two. But, I was so wrong. There were some seriously steep inclines and declines that we had to traverse. And I grunted and groaned most of the way with shaky legs and hips that were screaming at me.

It was honestly a great time, though. Once I was parked safely on my duff resting. This was my first time to camp with the Scout troop, and I was so impressed with their independent spirits and how the young men banded together. 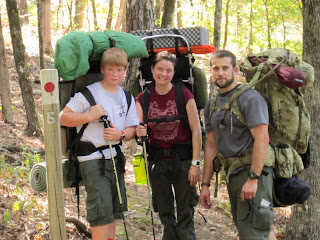 I must admit, however, that the best part of the entire trip was seeing how much of a good sport my son was. He and I both borrowed old troop packs since we don't own backpacks with external frames, and his broke three times before our hiking trip was complete. He had some help from Hubby and another Scout Dad tie up the back pack, then he kept moving on. Not only that, but he also had a young tent-mate who decided to overeat a box of Slim Jims and barfed in their tent at about 6:00 a.m. on Sunday morning. My Little Guy didn't complain, he just dealt with the ordeal. And when I asked if he had a good time, he told me had an absolute blast.

I'm so proud of him!

And, I'm super proud of Hubby for putting up with my complaining, Grandma-Hiker state of mind. He coached me when I got to the points where I said I didn't think I could go any further. He rested with me when I needed it. And he handed me the shovel when I needed to find a potty. Can it get any better than that?