A Quick Project for Father's Day 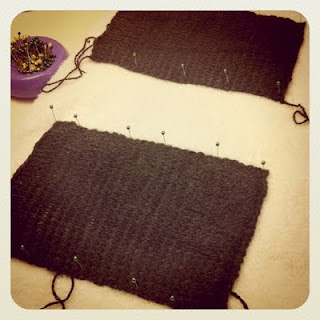 This week has been quite productive with regard to crocheting my husband's father's day gift.

I gave him a [amazon_link id="1400532655" target="_blank" ] NOOK Color [/amazon_link]for Christmas, and thought it would be nice if I made him a little storage pouch for it. What's kind of funny is that Hubby is out of town and he took his Nook with him. So, I had to look up measurements online and now I'm having a bit of difficulty knowing exactly how I should make the top section. I'm thinking of a fold over top with a two-button closure. Do you think Barnes & Noble would let me test one of theirs out?

In April I attended a class by Mary Beth Temple of Getting Loopy on Tunisian Crochet. This is the technique I am using to make the Nook Pouch. I started with Tunisian Simple Stitch for the first row, then switched to the Tunisian Knit Stitch for the remainder of the project. I finished up the top with a row of slip stitches so it would match the bottom row. If you're working with Tunisian Crochet, it's worthy to note that I stitched my first row in 'the bump' of the chain (instead of through the loop of the chain) to give a neat, slip stitch effect to the bottom row. This was recommended in the class I went to. Try it out if you haven't already, I think you'll really like how it looks.

Another thing I think worth mentioning about utilizing the Tunisian Knit stitch for this project is that the inside of the pouch (the purl-looking/wrong side of the fabric) will give a bit of extra padding to the Nook for protection. I thought that was important since Hubby will most likely be toting his Nook around when he travels.

The Frog Tree Meriboo yarn is a wool/bamboo blend that is so soft. (The color is #45.) I absolutely love the way it feels when I run my hand over the fabric. I talk more about the brand of yarn and fiber content in Episode Two of the Shorty's Sutures Podcast. I hope you'll check it out when it's available later this week.

To make the Nook Pouch simply chain 25 loosely, Tunisian Simple Stitch the forward pass of the first row and make a standard return pass; for the second row Tunisian Knit Stitch across and keep using the standard return pass. Repeat the Tunisian Knit Stitch until your fabric is approximately nine inches long, and repeat the process to make a second piece of fabric the same size. I'll update my instructions once I finish the entire project and have the top completed, but you could make a drawstring closure for the top, or a fold over button or hook/loop closure. Embellish with an applique if you'd like and there you have it!
Posted by Shorty at Thursday, June 16, 2011