Yesterday I spent most of the day in a little town in East Texas called San Augustine. My grandmother passed away and my mom and some of our other relatives drove to San Augustine for her service. Grandmother actually lived about 20 miles just outside of town, but San Augustine is where she would come to when she would 'go to town.'  There was another service underway when we got to the funeral home, and since it was such a small town the funeral home was pretty little, so we needed to busy ourselves elsewhere until it was time for my grandmother's service.

There weren't many shops on the town square, but most of them were closed. It seemed to be the trend to open from Wednesday through the weekend. We were there on a Monday so the only shops to browse through were a boutique and a drug store. The drug store was not your typical one, though. It had an old fashioned soda shop along with tons of knick knacks and little gifties to peruse. 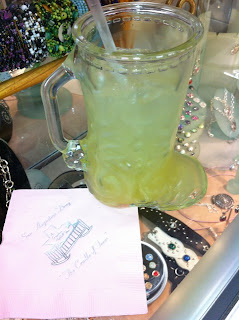 While we were walking through the store the sales clerk did the sweetest thing. She brought us these Grapefruit Highball drinks in a little glass boot. At no charge. She said they were 'sort of famous' for all the grapefruits that they grew around there. The drink was delicious, but when we asked what the recipe was we were told they couldn't reveal it.

We sat in their little soda shop and listened as the drug store personnel greeted each regular customer by name and chatted with them while their purchases were totaled up. It was sweet. I don't get to see that kind of interaction in the big city much.

My grandmother really bragged about her charming little town. Perhaps part of why she enjoyed living out in the boonies so much was when she drove into town she was treated like an old friend whom the town folk had known forever.