Saturday night The Little Guy had a sleep over that he went to so Hubby and I took it upon ourselves to get a little wild and crazy.  After an entire day dedicated to working for him I told him I needed a nice meal paid for by the company.  He took me to PF Chang's.  Loved that!

After dinner we headed to the local Wal-Mart (or Wal-Marts as some of the southern elderly like to say) to make sure we had coffee, orange juice and biscuits for Sunday morning.  Mainly we went for coffee, the other items were quite secondary on our priority list. 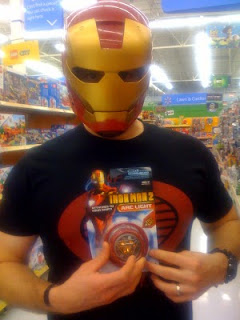 Hubby felt the need to take a detour through the toy aisle.  And look what we found...

I was cracking up so much that I thought that would make a good Facebook post, so I promptly uploaded the picture with a little message.  I also noted a joke that Elmo told me while on the toy aisle and told my FB readers how much I loved me some Elmo.  I was accused of being weird and drunk.

That's ok.  I have an Elmo TMX in my closet that I like to whip out from time to time just to hear him laugh and see him slap his leg while he cracks up.  Elmo is just the cutest Sesame Street character E-V-E-R in my book.  I even pulled him out when we got home, but I realized he is in dire need of a battery recharge.

Sunday was another work day, but this time I was in my sewing room.  I had a veil to make for my sister's upcoming Bachelorette excursion and she asked me to make her wedding garters.  I don't have a picture of the veil since I'm still working on it, but here is a sneak peak of the garters so far.  They just need a few embellishments and they'll be ready to wear.

The garter on the left is the one her groom will throw, and the one on the right is the one she will keep.  I think she picked out beautiful lace that matches her vintage 1930's/1940's theme perfectly!
Posted by Shorty at Monday, May 24, 2010