Last night Hubby, the little guy and me had an absolutely fantabulous time. I'm not exaggerating! You know how some Friday nights, you get home, fix and eat dinner, then just relax and veg in front of the tv watching movies? I really anticipated that to happen to us since we didn't have any plans to go out to eat or do much of anything. Happily, I was very wrong. It was no run-of-the-mill evening at our hacienda!

The little guy started by asking if we wanted to play a game after we finished dinner. Hubby and I were both game (ha, ha, ha!) and the three of us headed to the game closet to pick something out. We picked the "America" version of Monopoly. We hadn't played this game literally in years. Around four or five years to be exact-ish. This version is muc 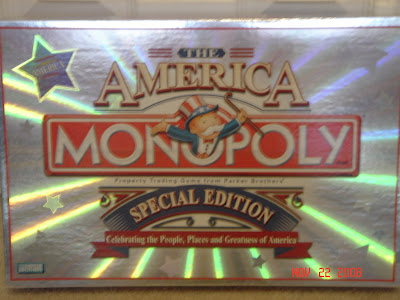 h more fun than we had remembered, or maybe we're just more in-to the "American" theme now than we were five years ago...who knows. I highly recommend you check it out, tho, if it's still available.

We got started and all three of us began buying up properties and charging rent! This version also has American People and Places cards that lead you around the board, as well as American Challenge cards where you are asked trivia questions. One of the cards I drew had me pay a fine because Susan B. Anthony voted, which reminded me (again) that yes, there was a time when women weren't legally allowed to contribute politically to how our country was led. What b.s. back then!!! The little guy, who's ten years old, cracked us up when he had to add up how much rent to charge us when we landed on his monopoly and said, "I can't believe you guys are making me do math on a Friday night!" Of course he said that with a smile, but it was one of the extremely funny innocent remarks that kids make all the time.

We played for over three hours straight. I was sooo ready for bed by that time! The guys seemed to be ready to play all night, but gave in with my request when the little guy was practically bankrupted by the rent due to Hubby on one of his many monopolies. We had such a great time! All future Friday nights now have something more to live up to. Maybe we'll make it a regular thing! I certainly hope so.
Posted by Shorty at Saturday, November 22, 2008