Sorry I don't have the proper Spanish symbols for my title....but here are my beloved children...one doberman, one chihuahua and one fantabulous boy with some face paint when he was a skate punk zombie! 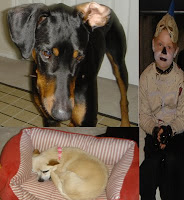 They bring me so much joy every day. I miss them when we're apart from each other. They are so loving and devoted. What would I do without my leeetle beeebies??? I know I've blogged about anonymity and not wanting to put faces up of my family members, however I justified adding my favorite little boy to this shot because of the somewhat incognito thing he's got going on, plus this picture is two years old....he's changed a lot since then!

I love being a mom! I can't imagine life without my son and our pups. Sometimes I like to think about how much motherhood has changed me over the years. It was an instantaneous makeover. When I first became a mom I was scared of everything, phobic about the slightest germ and paranoid as all hell about anything you can imagine happening to my baby. I drove a lot of my family members crazy. Some of that has faded....I'm not near the germaphobe that I used to be and I "let go" more now with things my son wants to do or try. Motherhood altered the way I looked at everything....if I would work outside the home, when I would work, what I would do, who I would let be around my child, what environments I would take my child around, the list goes on an on...

There are several things I would do different now, ten years later, if I had a newborn. I wouldn't be so paranoid...wouldn't live in fear that my son would be harmed if I wasn't guarding him....I would certainly try to be a much more relaxed parent. But there are also many things that I wouldn't change. I've always been very affectionate to him (along with other family members) so I definitely wouldn't change that. My son is such a loving and lovable little guy that I think is a direct result from being hovered over and smooched on as frequently as possible. I wouldn't change the fact that I question him a lot, too....ask him about school and what he does in class, who he hangs out with, who he talks to on the phone, if he has a girlfriend, what he does at other people's homes, talk to his friends' parents....that sort of stuff. Yes, I'm a bit nosy, but I want him to know that I care and that I'll check up on him so he better tell me the truth. Plus, when I question him it prompts him to question me, too. We have a lot of really good conversations that way!

I'm also really glad I'm a dog lover. Not a huge fan of cats....mainly because of allergies, but also because they roam everywhere and have an "I could care less about you" attitude. Most dogs aren't like that unless they are bred or raised to be that way. My dogs are affectionate and cuddly, and so very loyal! They think they are little humans, and I like it that way! I just can't imagine coming home and not having them there to greet us and be part of our family.

My children make me want to sing and dance around acting goofy! Right now I would love to be jumping around the living room with all three of them to "Shake It" by Metro Station. I'll see you guys very soon!!! (not than any of them read my blog.....)
Posted by Shorty at Thursday, October 16, 2008