Another wonderful weekend is drawing to a close, but I'm so excited to be able to share my experiences with you! I'm sure that sounds super cheesy, but I can't help it. My family members call me a "dork" pretty regularly, and I'm happy to say it fits most of the time! On to some details...

Friday's Potluck Lunch at work was a huge success and everyone at the office seemed to have a great time. There were a couple of Negative Nancies, but I think the rest of us turned most of them around. After that it was on to my friend K's beautiful new house. We had a great time sitting around chatting, having a bit of wine while we unpacked her formal dining room. It ended up just being the two of us, but I was really grateful for that. We turned up the tunes and talked about anything and everything that popped into our heads!

Saturday, Hubby and I went to our son's football game, and unfortunately his team was creamed again. Not just a little, but by a landslide! Two of his coaches were behaving horribly and setting a perfectly bad example of sportsmanship. We actually snapped a picture of the head coach getting in the face of one of the referees. Granted, the refs were missing some pretty big calls but really now....this is pee wee football we're dealing with. Those guys were acting as if it was the NFL and their careers were riding on the outcome of the game. I felt bad for the boys on the team. They played hard and gave it their all only to have to deal with some screaming middle-aged men trying to live out their fantasies through other people.

After we got home, Hubby and I exchanged our anniversary gifts and went outside to share the vows that we had written for each other. We stood in our backyard under a willow tree (that's me and the willow below) that we planted after buying our house. His vows were very touching and sweet, and of course I cried while delivering part of mine. That also made me laugh a little since I tend to laugh when I get nervous or embarrassed, and I had to apologize for the interruption, but I managed to say everything out loud even though some of my sentences were a bit broken up. I'm so glad we did that! It was truly special for both of us.

Later that evening Hubby and I headed downtown for our anniversary. We had dinner at a restaurant called Charleston's. It's nothing super fancy but it's where we went for our first date, and you may remember from Friday's post that we had decided to recreate our first date as part of the celebration of our fourth 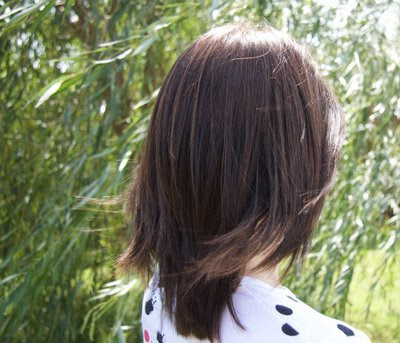 wedding anniversary. Dinner was delicious, just like we had remembered, and we agreed we both overate just a bit. After that we hit our favorite pub, but quickly realized the beer wasn't doing anything for our overly full stomachs. There is a beautiful wine bar several blocks away that we walked to, and the walk was just what we needed. We felt so much better by the time we got there and settled in for a romantic, candle-lit experience. We sampled a bit of wine and cheese as we chatted, then hit up Starbucks to have our "dessert" before we drove home. (Yep, we've got a lot of calories to work off this week....we kept laughing about consuming so much food and sweet stuff. Oh well, it was a very special occasion!)

We had such a great time! Today we've both been working on stuff around the house, including putting up some Halloween decorations on the porch. The little guy will be back with us tomorrow and the week will begin again with all the family things that make time go by so fast. He and I will head to the pumpkin patch one evening this week, which is something he looks forward to every October. It's fun watching him make his selections. I'm sure in a few more years he'll think he's too old for that so I've got to soak up what I can.
Posted by Shorty at Sunday, October 05, 2008